Peter Nichols 1973 play ‘The Common’ (which concludes our ‘TV’s Forgotten Dramas’ season at BFI Southbank on February 26), presents a drama of intricate balances and elegant ironies, realised through the story of two contrasting couples living either side of a common in a London suburb. 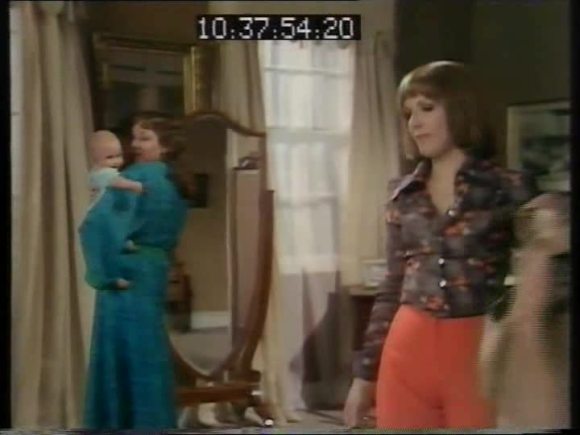 Edward (Peter Jeffrey) and Jane (Viviene Merchant) Noble live in a large house on the exclusive side (he works in the city), are in their forties with two teenage children. On the other side, unmarried Sean Lamb (Dennis Waterman) teaches at the Watt Tyler Comprehensive and lives with girlfriend Jane and their baby son in an uncomfortable basement flat. Two disputes (the founding of an ex-offenders hostel in the working class area and a couple who set up home by parking their minibus opposite the Nobles’ house on the common), bring the two couples into flirtatious contact with each other, and cause them to challenge the values which they build their lives upon.

Nichols’ play explores nuanced and complex arguments about property and ownership through the medium of social comedy, the light surface making palatable features such as Sean’s mixed motivation of principle and resentment, or the pain and insecurity experienced by Jane, with her attempts to do good works while facing middle-age, the growing independence of her children and a waning sense of sensuality.

The Common is set in a very precise and specific mileau and location (although not specified onscreen, Blackheath in South East London), and captures the mix particular to London of classes and their interdependence (perhaps more apparent in 1973 than the present day, where London’s rich are more gated-off from the poor, and the working-class community increasingly priced out of the city). This sense of place and time is evoked not just through Nichols’ script (which makes dramatic play out of living conditions such as the deafening boiler in the basement flat), but also through the great strengths of in-house BBC production of the 1970s, especially the tremendous set design, which realises a story about property through domestic interiors that are dressed with great attention to detail, the crisp, picture of 2″ colour videotape presenting these detailed rooms in a hyper-real, intense definition.