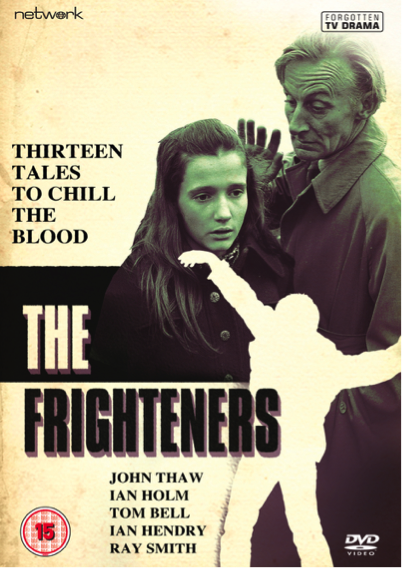 We are pleased to announce the launch of a new range of ‘Forgotten TV Drama’ DVD titles drawn from the ITV Archive. The range will be curated by the ‘History of Forgotten Drama in the UK’ team at Royal Holloway and released by Network Distributing Ltd. The first title will be The Frighteners, London Weekend Television’s 1972 anthology of half-hour psychological horror films, released on 15 May 2017. The DVD will include a booklet, featuring an Introduction from Gilli Bush-Bailey (Gillian Bailey) and Viewing Notes by Billy Smart.

Broadcast only once (or at most twice) in a time before on-demand, catch-up or the video recorder, most of the drama made for British television up until the early 1980s has lain unseen for generations. Since 2013, The ‘History of Forgotten Television Drama in the UK’ research project at Royal Holloway, University of London, has existed to investigate and celebrate the tremendous wealth of neglected dramas made for British TV, unearthing forgotten treasures and presenting them again to new audiences.

‘Forgotten TV Drama’ is a new range of DVDs presented by Network Distributing Ltd in association with the project. Selected and curated by TV experts Lez Cooke, John Hill and Billy Smart, the collection will make a wide selection of unseen titles from the ITV archive available once again. The range aims to encompass a broad spectrum of plays, series and serials; comic and tragic, realistic and fantastical, film and videotape, lavish and intimate.

The Frighteners – a series of 13 short psychological horror films from the early 1970s – is our launch title and encapsulates our aim for the ‘Forgotten TV Drama’ range. 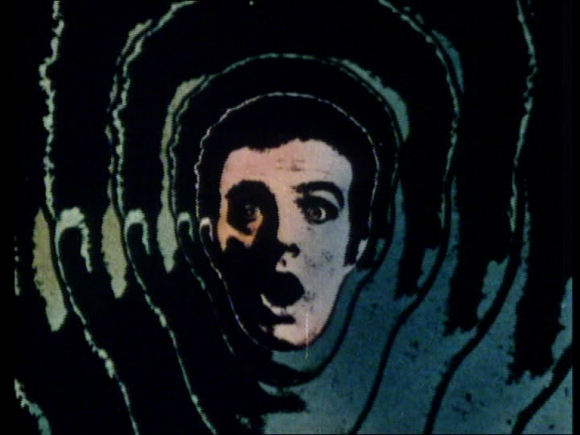 “No creaking doors, clanking chains, ghouls, ghosts or Frankenstein Monsters. But London Weekend’s new thriller series, The Frighteners, will still chill the spine and is guaranteed to give you the late-night horrors. The idea is psychological suspense: footsteps in the shadow of Hitchcock.” (Martin Jackson, ‘Terror takes a twist’, Daily Express, 7 July 1972)

The Frighteners is a particularly neglected and little-known British television drama, its 13 plays not quite fitting into the cult TV or horror niche that might have found them a later audience. The series’ terrifying title appears to promise nasty stories like Shadows of Fear (Thames 1970-73), or twists in the tale along the lines of Tales of the Unexpected (Anglia 1979-88). The Frighteners has similarities with these programmes, but its affinities are as close to Armchair Cinema (Thames 1974-75). A 16mm film series, The Frighteners uses devices of horror and fear to tell stories rooted in the concerns of the (early 1970s) present day; mental illness, parental separation, surveillance, housing lists, the aftereffects of colonialism and National Service. Producer Paul Knight intended The Frighteners to have “a distinctive flavour. There are no well-worn horror themes. Instead we show ordinary people threatened by situations which have ceased to be normal and are now out of control. Ordinary people suddenly strained to breaking point.”

Although little-known and almost unseen, the series was a showcase for a diverse range of talented and original writers (Wilfred Greatorex, Douglas Livingstone, Andrea Newman, William Trevor), directors (Gareth Davies, Jim Goddard) and performers (Tom Bell, Ian Hendry, Ian Holm, John Thaw), including an important work, The Manipulators, by one of the giants of British film, Mike Hodges. The series tells stories that can still move and excite viewers today, as well as provide an evocative record of the times in which they were made.

[…] Frighteners, the first title in our new ‘Forgotten TV Dramas’ DVD range (in association with Network Distributing) went on sale today. Little seen (even at the time!), not […]

I thoroughly enjoyed The Frighteners, it was riveting viewing. I vaguely remember a similar show around that time called The Man Outside, but can find very little information about it. I think it was BBC and from memory the one story that sticks was called Bye Bye Mrs. Bly, about an old woman who was thought to be a witch.
Menace was also a great 1970s series, it would be good to see that again as well.
Cheers
Chris Cornwell

Hello
I am looking for a six part serial made by ATV (Associated Television). It is called A Place To Hide.
It’s about three robbers who call themselves the Smith family who rob a bank and steal
£100,000 then steal a van and end up at a remote guesthouse then hold the family hostage.

I have episode 1 of 6 on a dvd called Look Back at 70s telly Issue 3 on disc 2.
The 1st episode is called the Hideout.

Will the entire six episode serial of A Place To Hide be released on Forgotten TV Drama @Network dvd.

I remember this programme when I was only 10 years old and seeing the first episode again after all these years has
made me want to watch the other five episodes as well.

Many thanks
Richard Taylor

We don’t plan to release any children’s drama in the range. This isn’t a pejorative value judgement on our part, just because it tends to be comparatively well-remembered and most of it will already be on Network’s radar.

Are there any plans to release A PLACE TO HIDE in its entirety? there are six thirty minute episodes. i know they all exist in archive. It would be great to see this much forgotten serial again from beginning to end.