Following the release of The Frighteners on DVD in May 2017 there have been four more releases this year in the Forgotten TV Drama DVD range (in association with Network).

The second release comprised three Nigel Kneale plays: The Crunch (ATV 1964) is about an attempt to avert a nuclear catastrophe in London, written for ITV’s Studio ’64 series; Ladies’ Night (Central 1986), part of ITV’s Unnatural Causes anthology series, is a chilling story of misogyny involving members of a gentlemen’s club who turn on a woman after she ridicules them; and Gentry (Central 1988) is a suspense drama featuring Roger Daltrey as an East End villain. Billy Smart has written viewing notes for the three plays and director Roy Battersby has written an introduction to Gentry.

The third release in the series is Arthur Hopcraft’s The Nearly Man, a Granada drama about a Labour MP (Tony Britton) who has an uneasy relationship with his northern working-class constituency. The DVD release includes the 1974 single play (voted best single play of the year by the Broadcasting Press Guild) and the seven-part series which followed in 1975. John Hill has written viewing notes, which include an extract from an interview with John Irvin, who directed the original play and four episodes of the series. 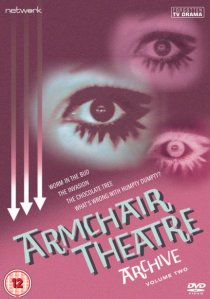 Look out for further releases in the Armchair Theatre Archive series, plus other forgotten television dramas, in 2018.

Will this series be released on dvd?

We have not considered this series for release.

Because there are hundreds of still-unreleased ITV Archive/ Fremantle dramas to consider. It’s unrealistic to expect all of them to be on our radar, and there has to be a particular aspect of historical interest to justify each release.