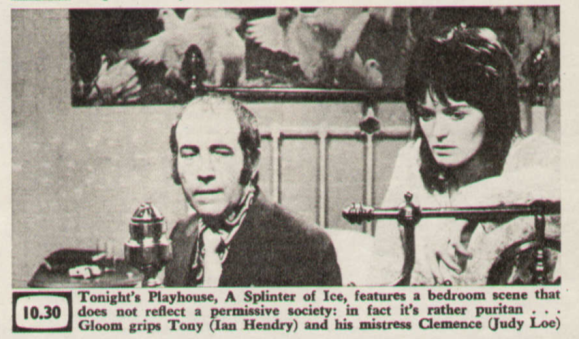 Our ‘Drama She Wrote’ season of neglected television plays by women writers at BFI Southbank continues at 6.20 on Wednesday 11 September with a double bill of plays by two famous novelists, memoirists, dramatists and playwrights, both of whom have been public figures in British culural life for over fifty years – Fay Weldon and Edna O’Brien.

Fay Weldon’s Splinter of Ice tells the story of an infidelity that leads to an unwanted pregnancy. Clemence, the mistress faced with the dilemma, is played by Judy Loe in her earliest surviving performance. The part was a departure for her, as she was best known at the time for playing telepathic orphan Lulli in Trevor Preston’s pioneering children’s telefantasy series Ace of Wands (Thames/ ITV 1970-72). Loe is backed by a particularly strong trio of consumate television performers of the period, in Ian Hendry as the husband, Annette Crosbie as the wife and Zena Walker as the wife’s best friend.

Choice is a one-woman tour de force from Barbara Jefford, who eloquently delivers Edna O’Brien’s hauntingly poetic prose in a piece that comes across like a dark and dreamy variation of Alan Bennet’s Talking Heads (BBC 1988/1998).

Fay Weldon was kind enough to share her reflections about writing for television in the early days with us, some of which we quote here:

Some info about women writers in the Golden Age

Late sixties early seventies was a really good time to be a TV writer. Writers were king, or occasionally queen, as the Companies realised how enormous the female audience for TV drama was, and were treated as such. Technicians used drama as a way of developing the new technology, still very much in its infancy. Writers wrote what they envisaged, technicians struggled to make it come true. (Footsteps appearing in the snow without human intervention, I remember, were a headache, as were people disappearing; but as the writer wrote, so they’d solve it. The more headaches you gave them, the happier they were.)

It was better to work for ITV than the BBC. ITV just had the cultural conditions of their various franchises to meet, so paid out, generously, and took the results for granted; the BBC had a kind of cultural notice board where your name would be either at the top in gold or at the bottom in red, and for no apparent reason. 11 to 15 million viewers was normal.

I noticed little. It was a new industry. I took for granted I was paid half what the men got. (In advertising I was told as a woman I should not accept promotion: it was taking the bread out of the working man’s mouth. A moral issue.) I complained that I was only allowed one cut in a show when men were allowed three. (There is one cut in Plays of Married Life: A Catching Complaint (Granada/ ITV 1966) to allow a film insert for the street scene.)

Few women came forward to write TV plays. There were no film schools, no training schemes: everything had to be done from first principles. It was generally held at the time that women couldn’t write effective stage drama – they lacked the necessary concentration, couldn’t hold two opposing ideas in their heads at the same time, which was what was needed in dialogue. And how could you write a TV drama if you didn’t understand how TV ‘worked’? Technology was a man’s thing, not a woman’s. So at first women stayed away, only gradually finding the confidence needed.

(with great thanks to Fay Weldon)