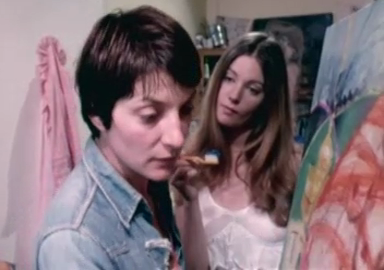 Our ‘Drama She Wrote’ season at BFI Southbank concludes on Monday with an 8.40 screening of two 1970s plays from BBC Birmingham.

The BBC Birmingham connection has been an unexpected occurence as, despite being catalogued, our billed second play (Jill Laurimore’s 1973 ATV drama Family Tree) turned out not to survive in the ITV archive! The same token which means that many plays thought lost in archives can turn up in them, sadly sometimes also means that things that are supposed to be in them turn out not to be there when you look… This leaves the unfortunate Jill Laurimore poorly served by posterity with both of her single plays now lost, and only three out of seven episodes surviving of her children’s serial The Georgian House (HTV/ ITV 1975-76).

Family Tree has been substituted at short notice with Mary O’Malley’s 1978 play, Shall I See You Now, which features Pam St Clement (later famous as EastEnders landlady Pat Butcher) as a new inmate in an asylum, making the screening a double bill of plays about women in a fragile mental state.

The play comes from the last series of Second City Firsts, a BBC Birmingham anthology series of half-hour plays that worked as a seedbed for a generation of writers and directors. Shall I See You Now was Mary O’Malley’s second play for Second City Firsts – the first, Percy and Kenneth (1976) no longer survives. Between the two productions O’Malley’s star had risen greatly. 1977 had been an annus mirabilis for the playwright with a well-recieved BBC Play for Today (Oy Vay Maria) and her schoolgirl comedy Once a Catholic opening at London’s Royal Court theatre and then transferring to the West End for a two-year run. Shall I See You Now was one of a pair of dramas set in asylums that O’Malley wrote at this time, with her play Look Out… Here Comes Trouble produced by the Royal Shakespeare Company later in 1978.

Watson Gould’s The Other Woman is unquestionably one of the most audacious plays broadcast during the twenty year run of The Wednesday Play/ Play for Today. Misleadingly promoted at the time as an “issues” play about lesbianism, the drama was actually a unique vehicle for Gould’s highly personal understanding of gender and sexuality, a world in which there are are three sexes, with the pinnacle of human insight awarded to the third sex of the male woman, embodied in the figure of Kim. In a terrific performance from Jane Lapotaire, Kim is a character whose every action in the play is in some way disruptive and transgressive. A nightmare to know, dirty, imposing herself on others but unwilling to empathise with their problems and yet not a bad person in themselves (although that is dependent on how the viewer interprets her sexual conduct), charismatic and their own invention.

The screening will be introduced by the playwright Simon Farquhar, who has written a fascinating critique and production history of the film, which is highly recommended.