We are pleased to announce a new season of Forgotten TV Drama at BFI Southbank in February 2019. Curated by Stephen Bourne and Lez Cooke ‘Forgotten Black TV Drama’ presents a selection of ground-breaking black British television dramas from 1961-1985, many of them not seen since they were first broadcast.

The season showcases the work of some of the most outstanding African and Caribbean writers of their generation, such as Jan Carew, Sylvia Wynter, Barry Reckord, Michael Abbensetts, Jamal Ali, Buchi Emecheta, Caryl Phillips, Mustapha Matura and Trix Worrell, and features pioneering black British actors including Lloyd Reckord, Horace James, Don Warrington, Cleo Sylvestre, Thomas Baptiste, Norman Beaton, Carmen Munroe, Rudolph Walker and Mona Hammond. There is also the first screening since 1961 of a play written for the legendary American entertainer Sammy Davis Jr in a rare dramatic role. This is an opportunity to rediscover some neglected dramas from the past, appreciate their continuing relevance and to participate in a debate about the present opportunities and future possibilities for black British drama in a rapidly changing digital landscape.

Trix Worrell won Channel 4’s Debut ’84 prize for best script with this compelling story of a black youth thrown into a conflict of loyalties when he teams up with two white friends and breaks into the home of a feisty black elderly woman.

+ Panel discussion featuring screenwriters Trix Worrell, Daniel Fajemisin-Duncan and Marlon Smith, actor Susan Wokoma (work permitting) and season co-curator Stephen Bourne, chaired by broadcaster Brenda Emmanus. The panel will discuss what we can learn about black drama from the plays in the season and what opportunities lie ahead for black creatives and writers in a rapidly changing digital landscape.

In Jan Carew’s explosive drama, Sammy Davis Jr gives a memorable performance as a proud but disillusioned revolutionary who aims to destroy the remnants of white colonial rule in a new African nation. The political themes explored remain incredibly prescient. 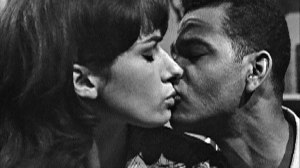 Barry Reckord adapted his stage play for television and his brother Lloyd plays the central character, a Jamaican new to London. When he begins a relationship with a white woman (MacLennan), he finds himself in conflict with his mother (Ida Shepley) who has great expectations for him. The very early intimate portrayal of this inter-racial relationship broke new ground.

+ The Light of Experience (BBC 1983. 15min)
Perfectly setting up the background to her Crown Court drama, The Ju-Ju Landlord, Buchi Emecheta talks about her life as a Nigerian writer who made her home in Britain. 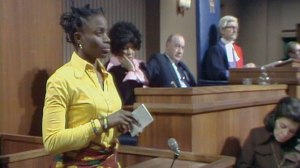 Buchi Emecheta draws on personal experience for this drama about a young Nigerian mother who flees from her husband and finds refuge in the house of a fellow countryman. When her landlord wants her out, he finds himself in the dock charged with harassment.

Written and narrated by Jamal Ali, this innovative, impressionistic drama shows how Britain – ‘The Promised Land’ – offered only frustration and rejection to Caribbean settlers in the 1950s.

+ Carbon Copy (ITV/ATV 1975, Against the Crowd, Dir Piers Haggard, with Don Warrington, Nadia Cattouse, Cleo Sylvestre, Judy Campbell, Simon Lack. 50min)
In Howard Schuman’s contribution to the Against the Crowd series Jamaican Albert Sharpe (Warrington) is no longer at ease with the cultured white family who have virtually adopted him.

The Hope and the Glory (BBC2 1984, Dir Graeme Harper, with Rudolph Walker, Maurice Denham, Carmen Munroe. 60 min)
Sam (Walker) is a quiet London Transport worker who prefers studying law in the evenings to socialising, until he meets Joe (Denham), a lonely elderly neighbour. But their growing friendship is tested when Joe takes Sam along to his local club. Caryl Phillips’ poignant drama is a masterpiece of understated writing.

In Mustapha Matura’s acerbic and offbeat dramatic monologue, the charismatic Norman Beaton is outstanding as a well-mannered man who is tested to the limit as he struggles to come to terms with life in the ‘Mother Country’.

Booking for the season is now open

[…] Here is the link to the ‘Forgotten Drama’ project website for more details: https://forgottentelevisiondrama.wordpress.com/2019/01/10/forgotten-black-tv-drama-season-at-bfi-sou&#8230; […]

[…] Forgotten Black TV Drama season at BFI Southbank ended on Monday 25 February with a double bill of plays from 1984. The Hope […]